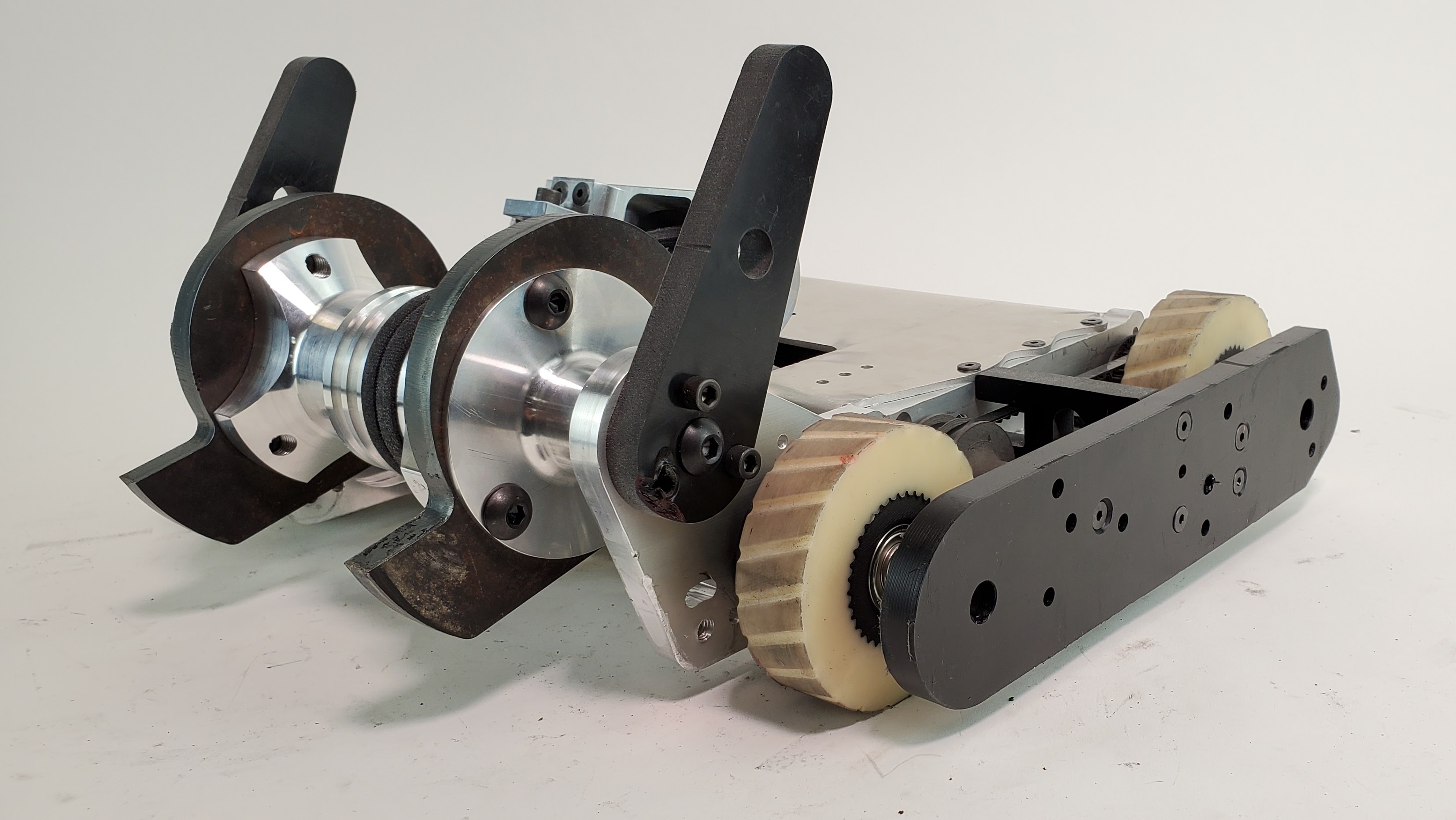 While at the University of Maryland, I took a leading role in Leatherbacks, the school's fledgling combat robotics team. Warlock, a 30 pound combat robot, is the largest bot I have built to date with Leatherbacks. I took primary design responsibility for the drive system, and was also the chief machinist, making intricate parts for the drive, chassis, and weapon systems, employing CNC mills, a CNC lathe, a waterjet, multiple 3D printing technologies, and rubber casting. For the project I made use of Solidworks for CAD, and Autodesk Fusion 360 for CAM.

The design process began in March of 2021, brainstorming general concepts. After a few basic design calculations to consider the feasibility of various weapon/drive combinations, we settled on a four wheel, differential drive vertical drum spinner. I took up the work of designing the drive.

We designed the drive system around several known values: the diameter of our wheels, and the types of motors we could reasonably fit into our robot at this weight class. Proceeding from these values, we computed the necessary gear reduction to ensure both a competitive top speed, and to prevent the robot from stalling when pinned (to prevent motor burnout).

Having arrived at these parameters, we evaluated several potential drive layouts and settled on gearboxes positioned relatively centrally, with their output being connected by timing pulleys to the wheels. This allowed the gearboxes and motors to be positioned very flexibly within the chassis, allowing adjustments to work around other components (batteries, controllers, etc.) and also protected the motors and gearboxes from direct hits on either the front or rear wheels.

We then designed custom axles, hubs, pulleys, tensioners, and wheels. 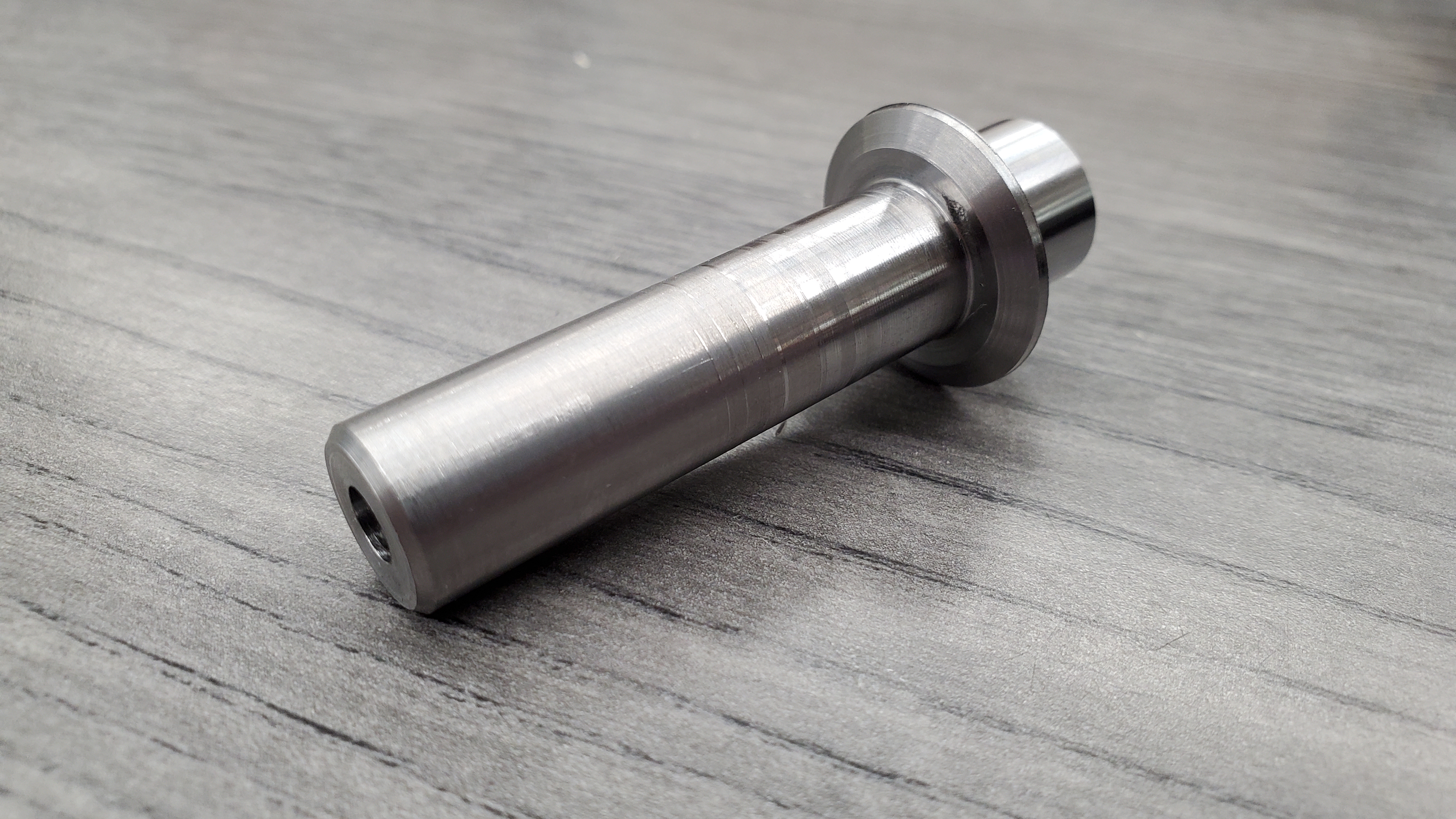 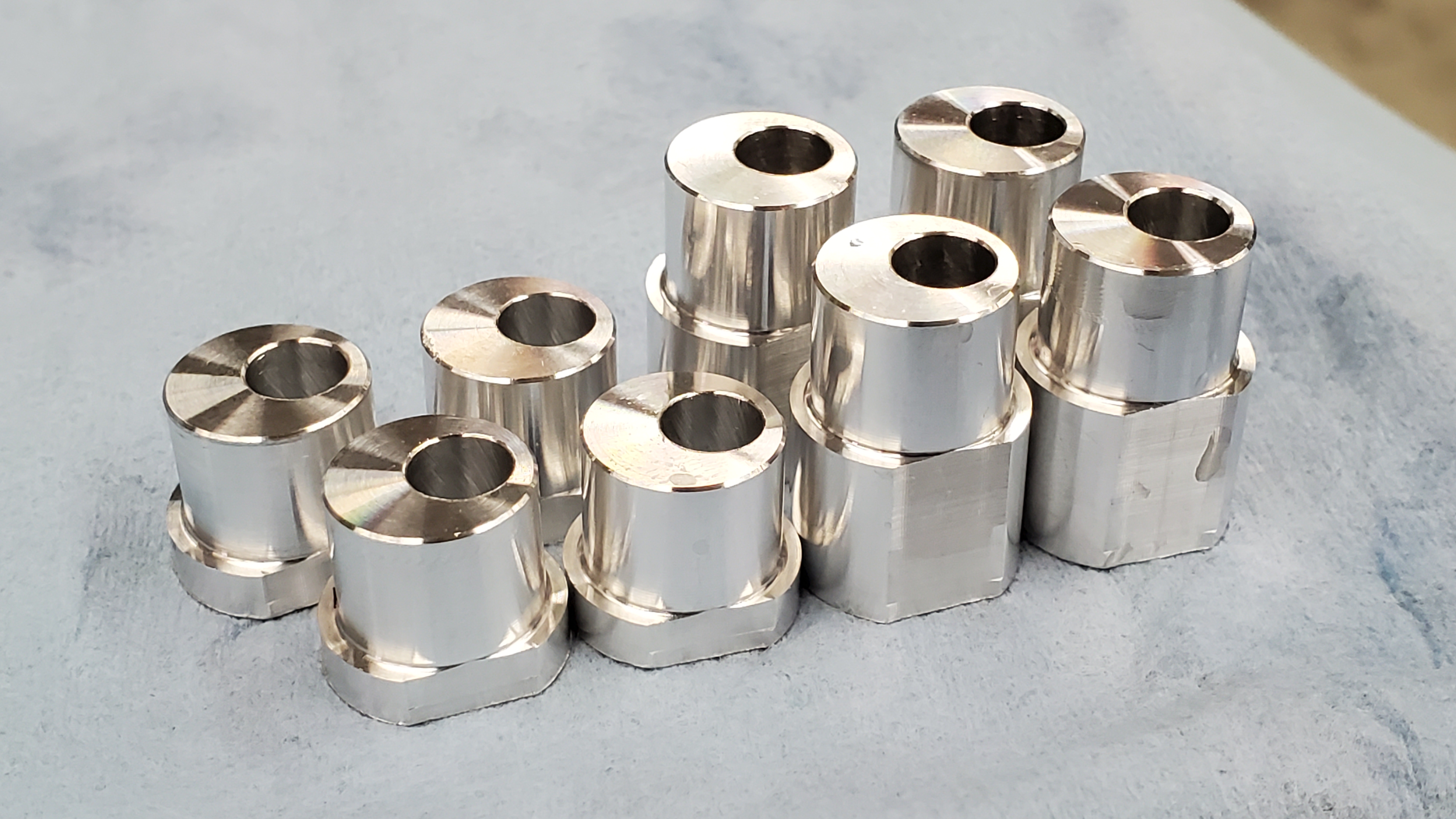 While I did not design the initial weapon system, it fell to me to manufacture most of it, including the most intricate component: the hub.

The weapon hub was designed to be a turn-milled piece of 6061 aluminum, which would serve as the pulley accepting torque from the weapon motor's belt, and then transfer that torque to the hardened steel weapon blades. Manufacturing involved first a turning operation, then a turn-milling operation for the splines and scallops, and finally a move to the mill where the part was held in soft jaws for final milling and drilling. 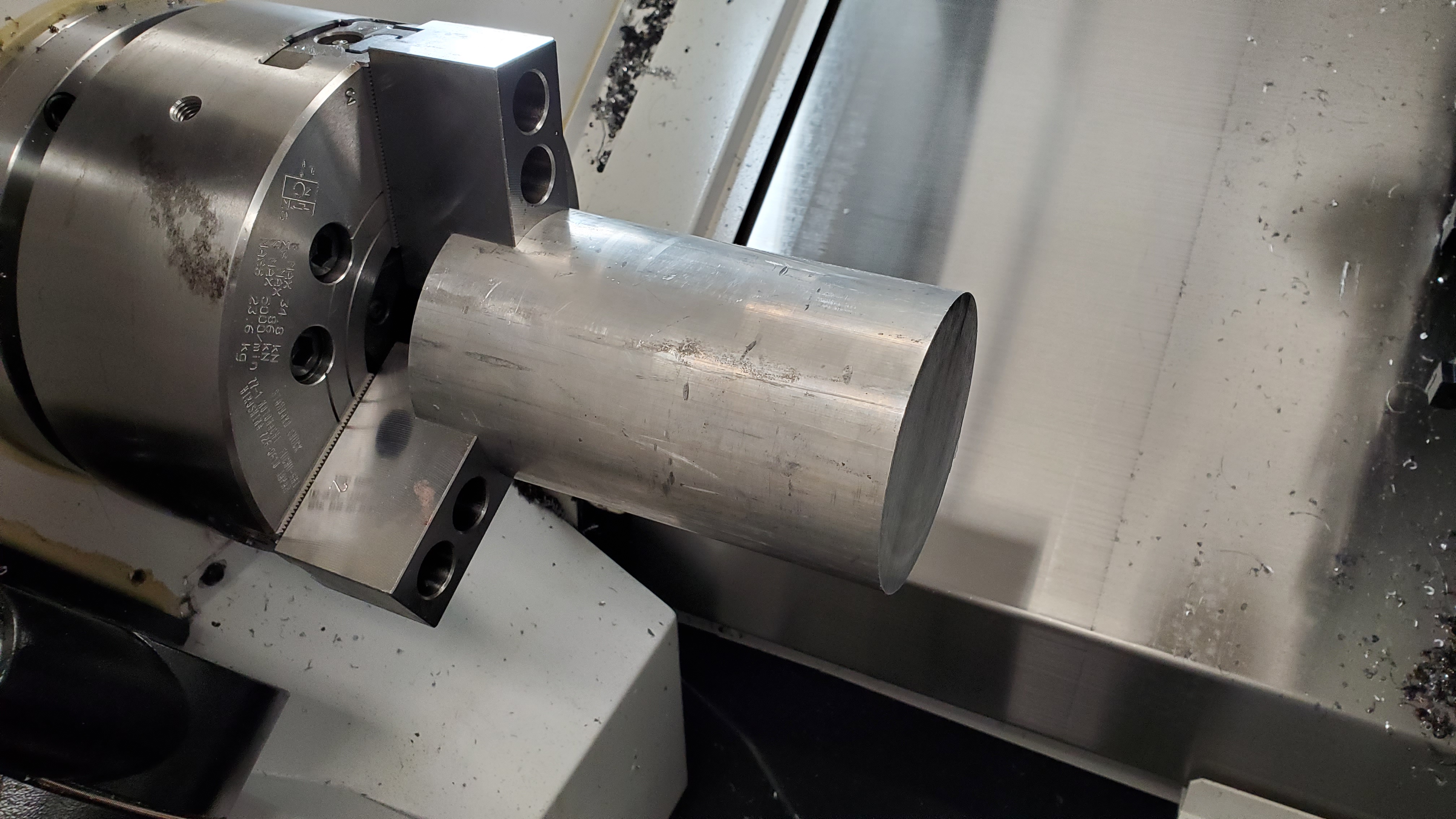 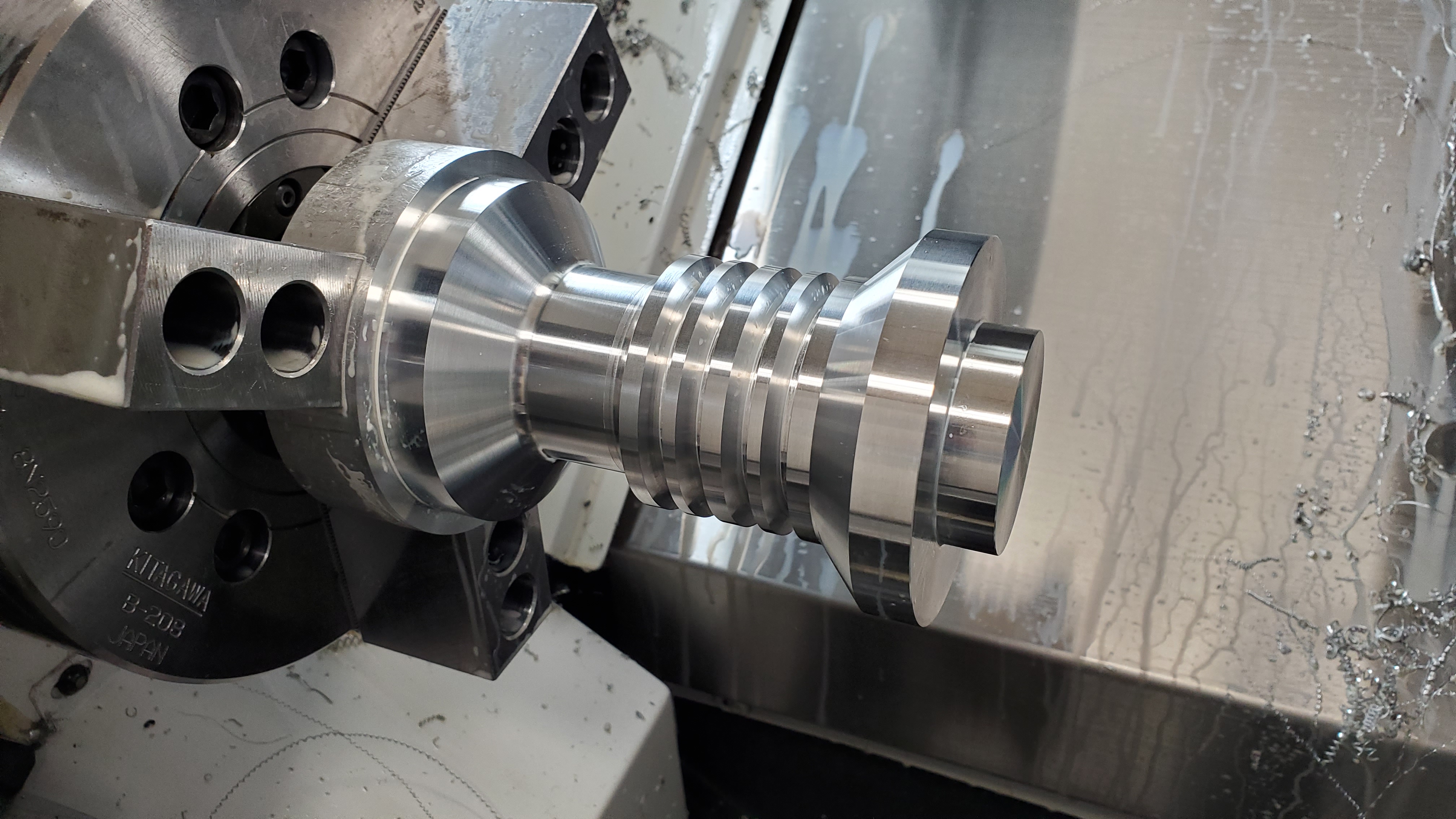 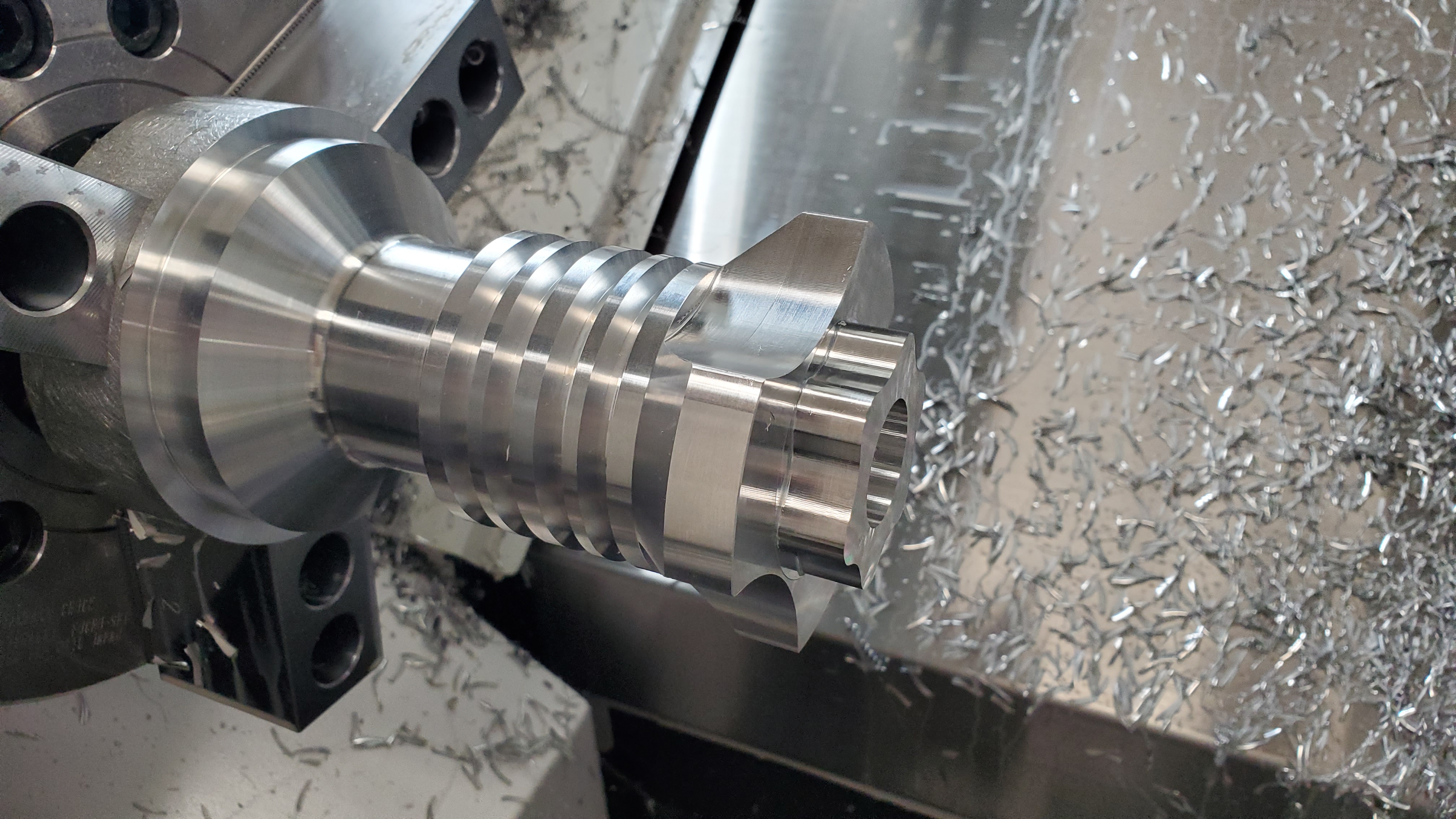 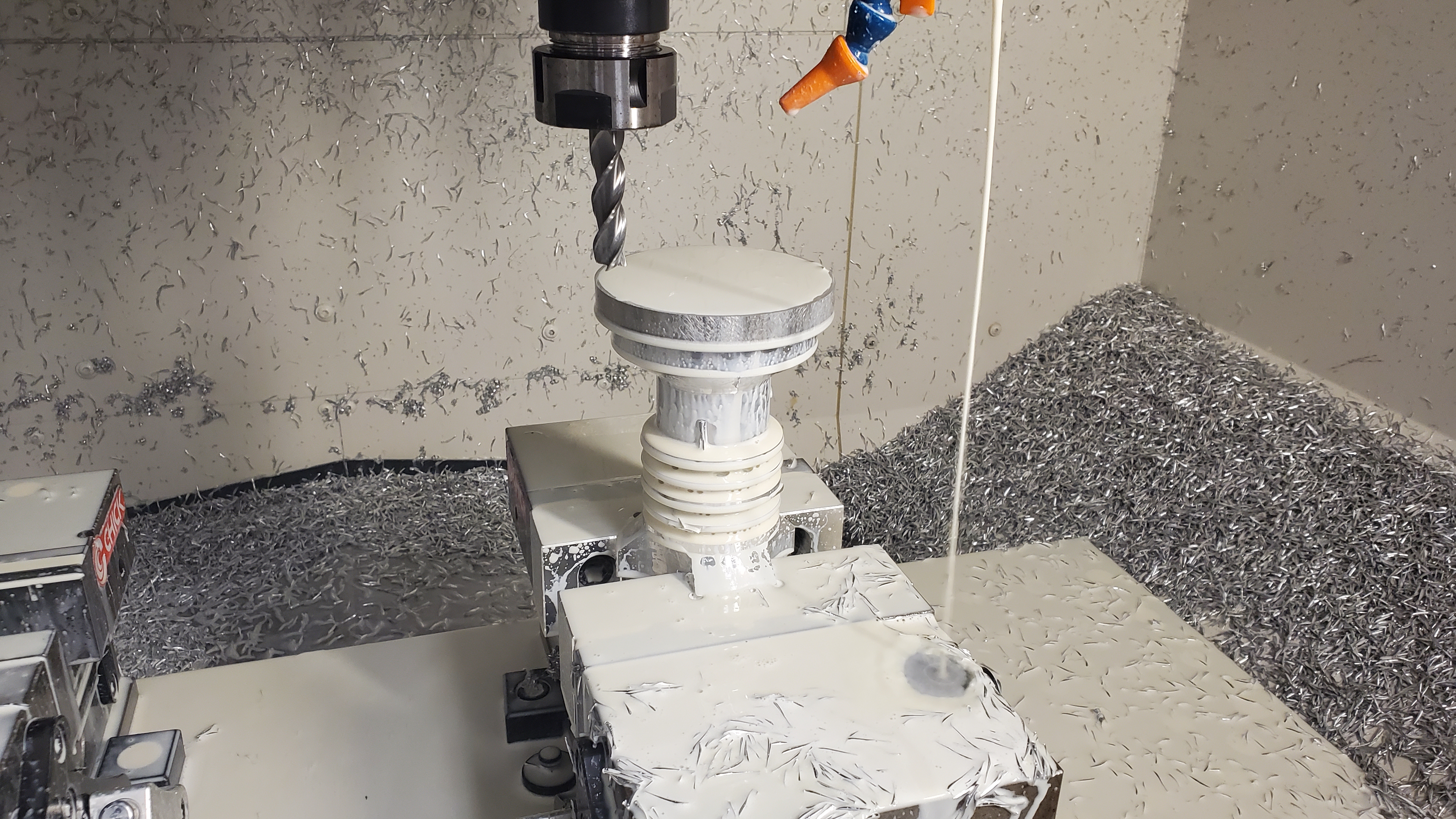 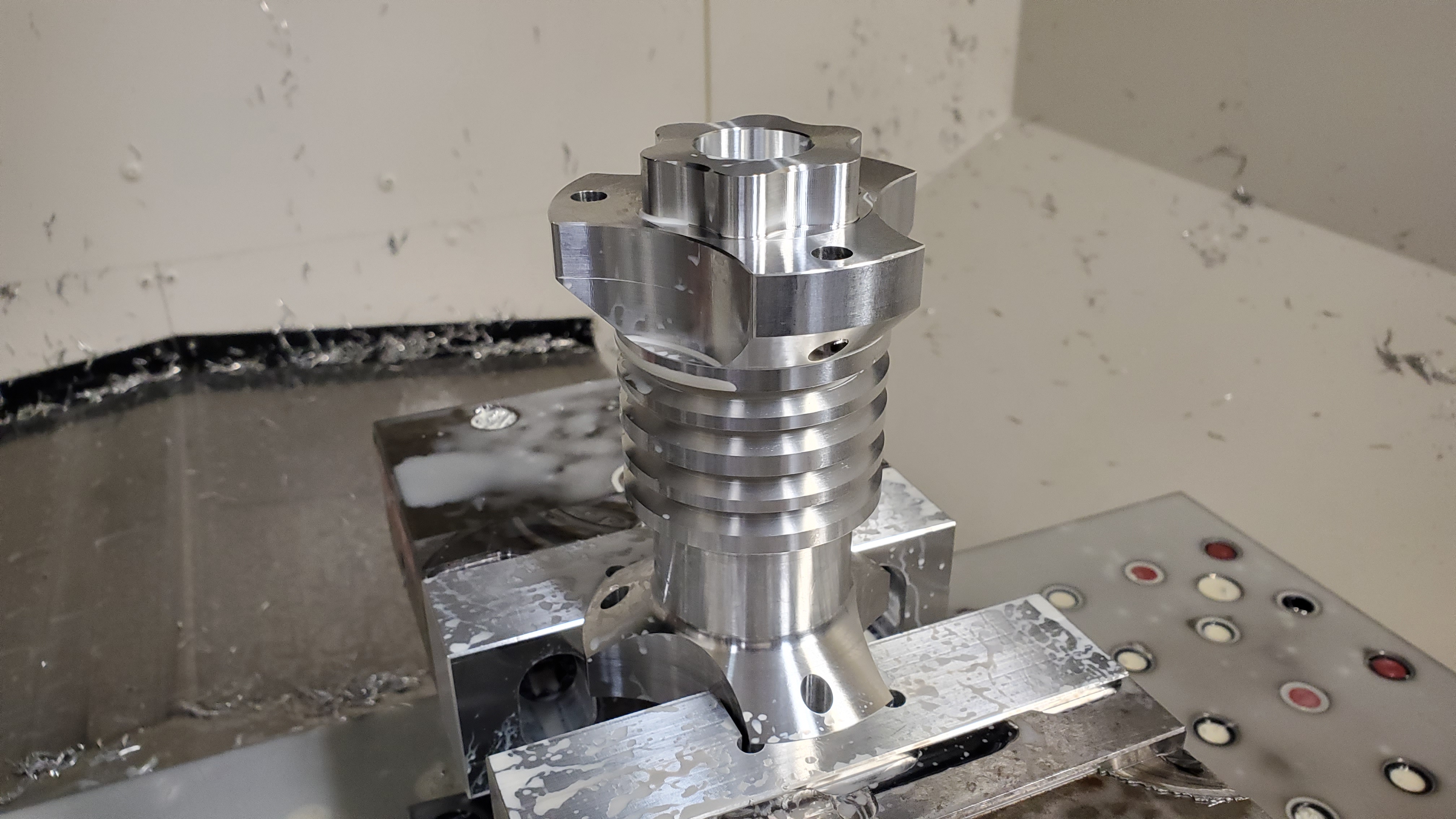 While the hub was manufactured to the original design, the clamp designed to hold the brushless motor which would spin the weapon was found to be inadequate for manufacture. As such, late in the manufacturing process I worked with other team members to redesign it entirely for manufacturability, and proceeded to make it on the CNC mill. 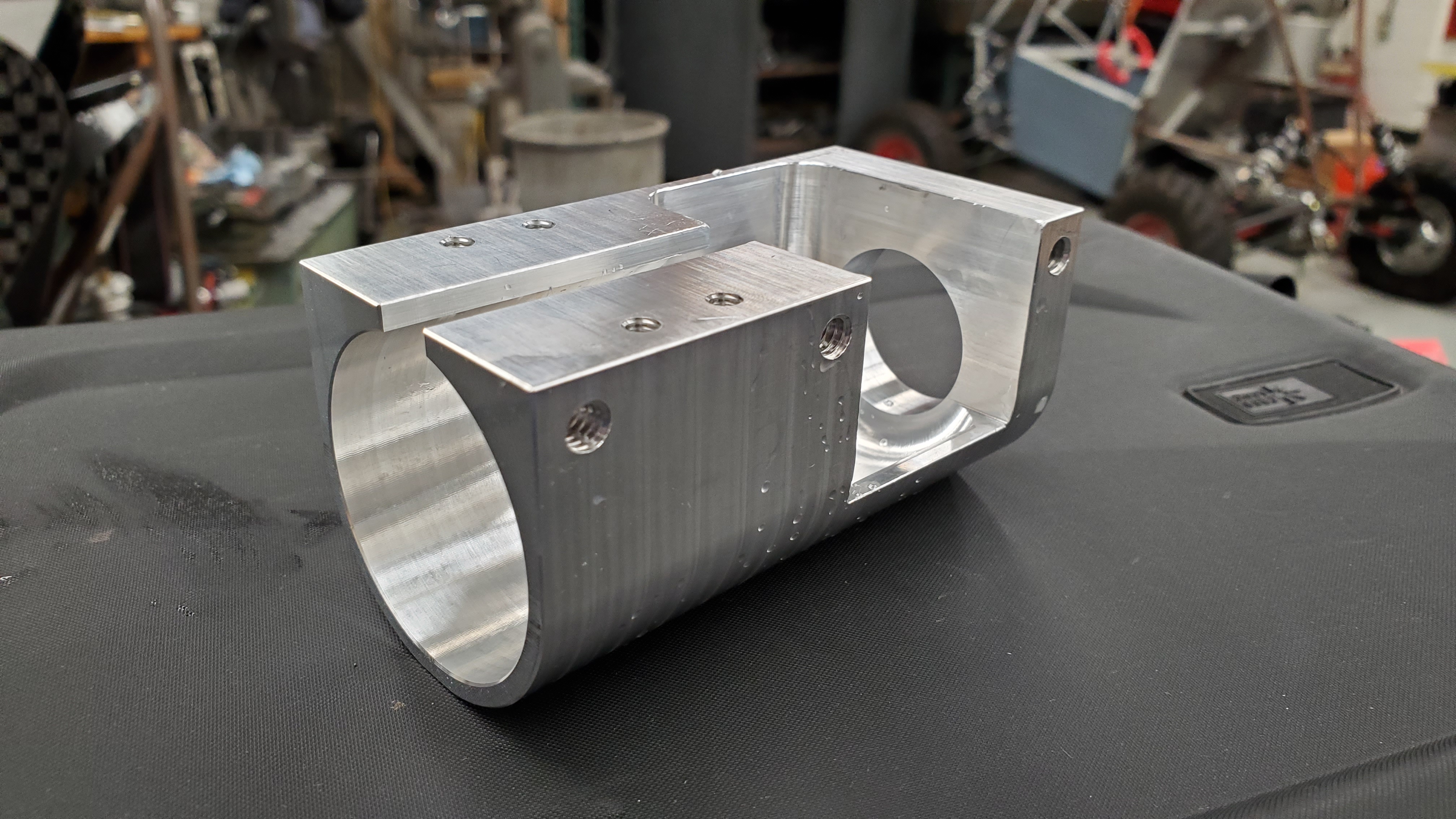 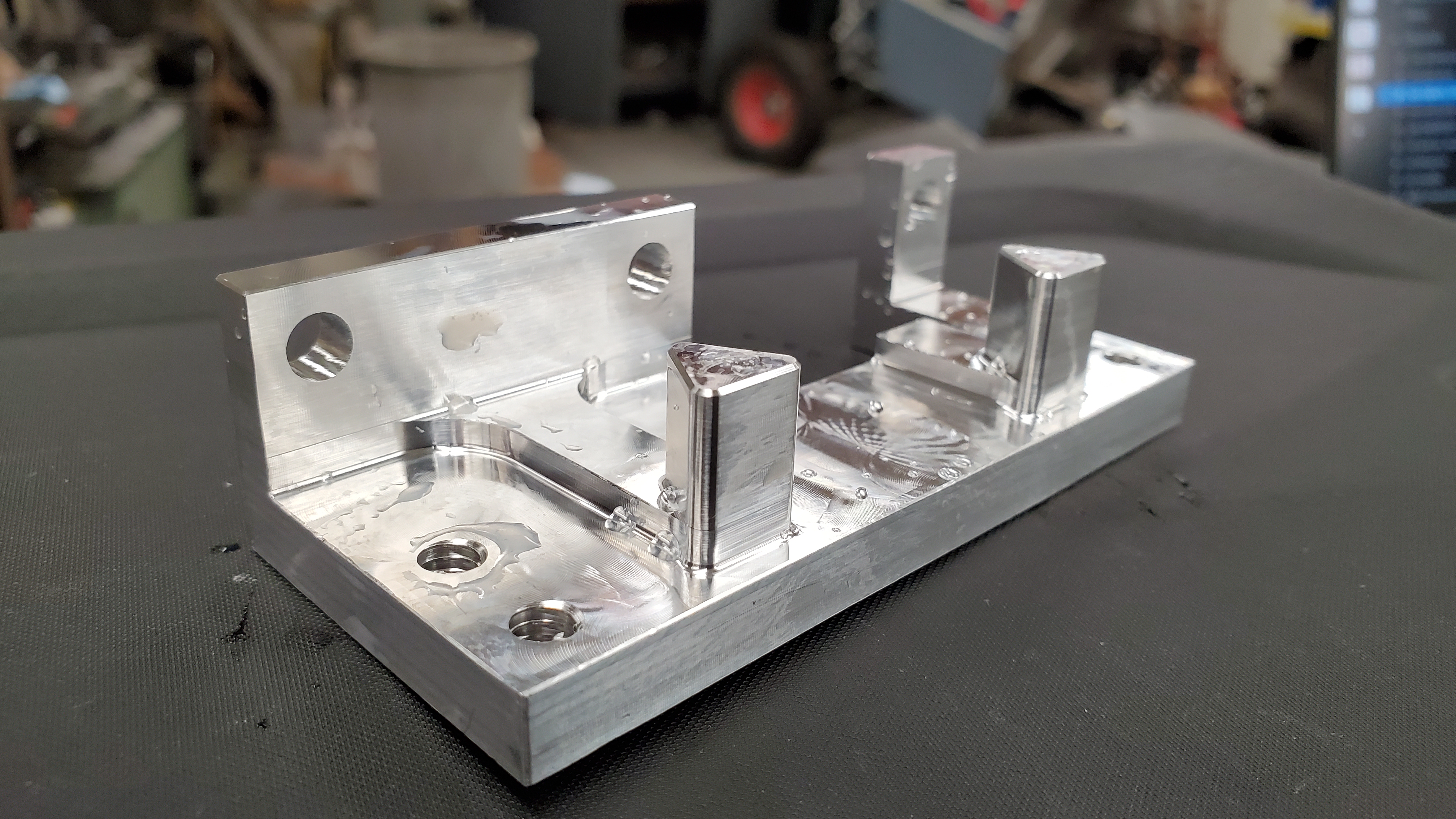